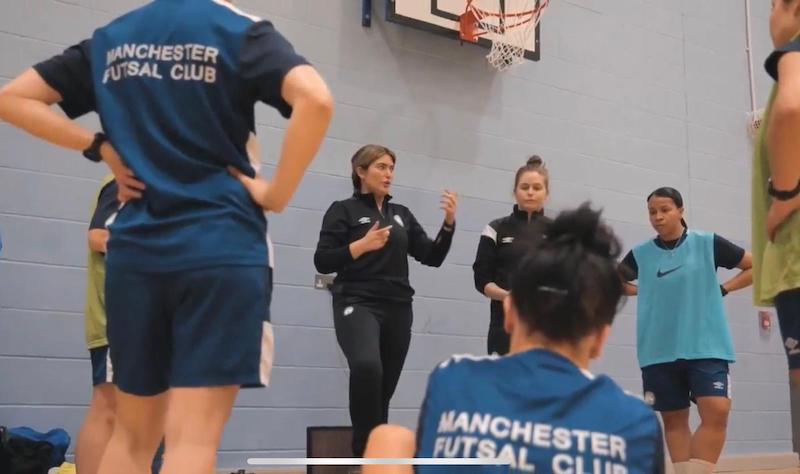 In a coaching team reshuffle of last season’s fab three, we are delighted to announce that Izzy Keighley will be stepping into the Women’s Head Coach role this season. With Chris Berrevoets as Assistant Head Coach and Leanne Skarratt stepping into a Technical Director role, Izzy spoke with manchesterfutsal.com about her hopes for the season ahead.

What are you looking forward to most about the season ahead and stepping into the Head Coach role?

It’s a really exciting time for women’s futsal in England and a privilege to be at the forefront of it all. Since the start of the pandemic and the lockdowns, we’ve been in a rebuilding phase. Last season was challenging, with lots of changes to adjust to in terms of players and staff. This season we are primed to hit the ground running, proving we can reinvent ourselves and really challenge the top teams.

What are the aims this season for you and the team?

We will definitely be contending for a play off place again. I want to change any perception that we are a flash-in-the-pan team.  Last season, we were often labeled underdogs and perhaps didn’t always get the credit many of our performances deserved. We’re here to prove that we aren’t to be underestimated. It’s been a privilege so far to work with international players and take on their experience. We’re looking forward to bringing new players into to the group and building a squad with real depth.

Two-thirds of our coaching team is female. What does this mean for you and for other aspiring female futsal coaches out there?

I believe we are the only WSS Tier One team with that statistic and we are very proud of it. Not only is the playing team here to challenge this season but also the coaching team. I’m currently close to completing my UEFA B license, something that only a handful of female coaches in England have accomplished so far, so that’s exciting. It’s also been great to learn from Leanne’s experience and I’m looking forward to working with her in her new role as Technical Director. The future is bright for female futsal coaches and we hope we can inspire more.

I’d also like to thank Simon Wright and the club for entrusting me with the team and for his unwavering support in the development of female coaches and players.