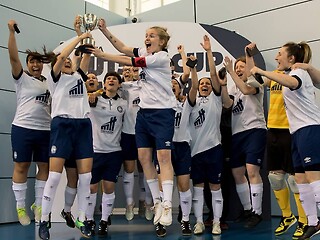 Manchester Futsal are delighted to announce that Panayiotis Michael will lead the Women’s Team as their head coach for next season, with Leanne Skarratt becoming his assistant.

Both have been heavily involved at the club in many ways over the years. Pana was the right-hand man for former men’s boss Sergi Saldana before his recent departure. Skarratt has been a long-serving member of the team and has provided some inspirational work on and off the court, leading her side to an unforgettable league and cup double in 2019.

That being said, both have been rewarded for their hard work with their new respective roles - with the Women’s side having bypassed this year’s FA Futsal National Series Summer Showdown to concentrate on their domestic efforts.

As the season is just a few months away, a recruitment drive is underway as the team are looking for new players that can help take the Women’s Team, along with female coaches to assist in developing the club’s youth programme.

Both Michael and Skarratt caught up with ManchesterFutsal.com to find out their initial thoughts regarding their new roles at the club.

You were Assistant Head Coach last season under Sergi Saldaña’s tenure. What does it mean to you to step into the Head Coach position this year?

What do you hope to achieve with this group of players?

At MFC the standards are always high. We are the biggest futsal club in England and so for us, as a team, we want to represent those standards in the way we play futsal. It’s never easy when there is a change in management however, we’re in it to constantly improve and hopefully win trophies otherwise, there’s no point in us being here.

What was it like to be mentored by Sergi, and what will you take forward with you in your career?

I am incredibly honoured to have had the opportunity to work under Sergi and learn from him what futsal is really about; on and off the pitch. The tactical intricacy and the level he expects of all his players and staff working with him is what truly makes him the great coach he is. I will definitely cherish all the lessons learnt under Sergi and apply them and the values of MFC to the work we do and hopefully, we can build a team which can continue to challenge at the top level of English Futsal.

Skarratt: “We are already planning for next season, and that includes actively recruiting new players and bolstering our squad. We would love to hear from any players (aged 16+) who have played futsal before, or played football to a good standard. The girls are back together training again, so now is the perfect time to welcome new additions to our ranks”.

If you’re interested in joining pre-season for Manchester Futsal Women’s Club in the 2021/22 season, either as a player or coach, please contact Leanne Skarratt at [email protected]