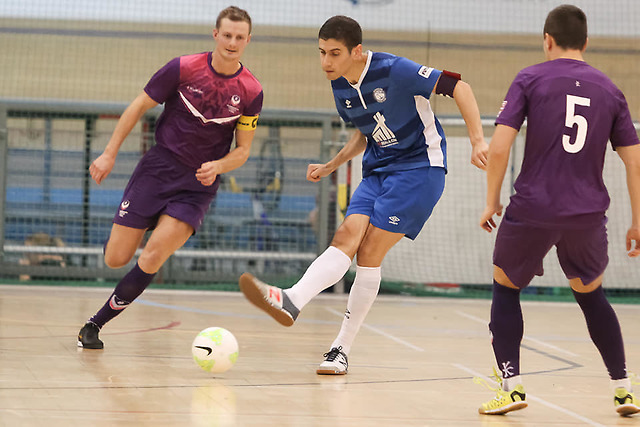 Manchester will return to National Futsal Series action as they face the reigning champions London Helvecia on Sunday.
The Blues have had a tough start to the new season and have only picked up one point out of their first three games, coming last weekend during a hard-fought 3-3 draw against Birmingham.
Goals from Harry Tozer, Junior Sousa and Raphe Barber meant that the spoils were shared at the Aldenham Sports Centre. Sousa took the role as the fly goalkeeper in the dying moments and scored a last gasp equaliser to ensure that the Blues came back to Manchester with a point in the bank.
Helvecia have picked up where they left out last season and have started with a 100% record from three games, but find themselves second in the league behind ProFutsal London on goal difference.
Head coach Sergi Saldana spoke to Manchesterfutsal.com and summarised his frustrations from the Birmingham match after captain Sam Richardson was suffering from illness. He added that Raducio King will be out for Sunday's encounter.
"Sam will play and it is true that was very difficult to play without him", he said. "Kingy [Raducio King] is not getting penalised is just that he has started to coach football on Sundays and unfortunately it seems he is not going to be able to play most of the games and it is a real shame because he is training quite well. This Sunday, for example, he won't be able either."
Saldana recognised the magnitude of the game against last season's table-toppers but believes they will have tough competition in the form of ProFutsal this season.
"This is one of the biggest games of the season undoubtedly but this year ProFutsal has a very good team as well and we fought for the game till last minute so we want the same against Helvecia, and also spoke about his side's preparations.
"Since we have started we haven't been able to play with the whole first team because of injuries, sanctions or players working and we are competing with a very young team. Last week, for example, Leo Tanswell made his debut in the first team and Jake Barnes played as well; plus Raphe, Harry and Scott.
"They are training very well but it is true that when players like Sam, Kingy, Edge or Victor can't play we notice the lack of experience. We have to learn from our mistakes in games and these learning process sometimes some mistakes that allow the other teams to score goals. However, we have to be more than happy to have plenty of young players with eager to compete and play futsal properly."
The game will take place at thePoint4 in Hereford, with kick-off at 12:40 pm.