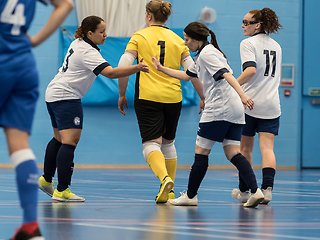 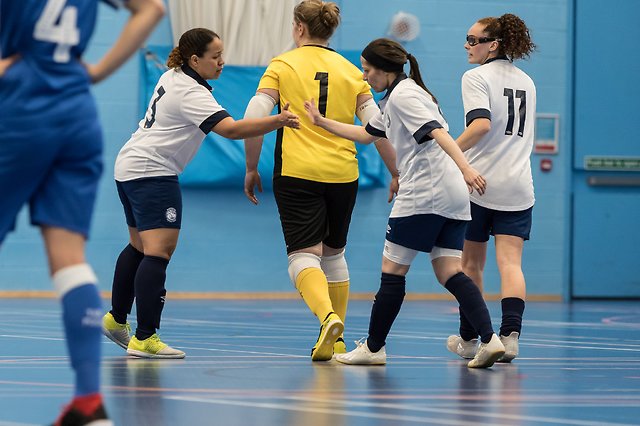 It’s the game that everyone has been waiting for, as the FA National League National Women’s Final is almost upon us. Manchester will take on London Helvecia to decide this season’s Champions of England.

An astonishing 5-3 victory over Peterborough sealed their place in the biggest game in Women’s futsal at St Georges’ Park against a side lacking in numbers but managed to get the job done.

After a season with many ups and downs for Leanne Skarratt’s side, they have the chance of glory as they aim to lift the trophy at the home of England futsal.

Men's Head Coach Sergi Saldana will coach the side on Friday when the Blues take to the court in Burton-on-Trent and has been speaking to Manchesterfutsal.com about the Peterborough game and how the Blues managed to get over the line.

“We played very well, and we knew how to face the game, playing as we did last months. I have to say that Peterborough had very talented players with very good abilities, but having only six players took them down a lot because they played all game with too much respect and without making physical excesses. I think that the same team with the full squad we would had won as well but it would have been a much more competitive game. In the end, we were winning 4-1 and we had three very clear chances to score the fifth, but we didn’t, and we allowed them to score two goals, but we had the game under control all of the time.

“If my input on training has made the team better? Of course. How does a team improve? In training and then carrying out what we are training on games to correct mistakes and get better. If you compare how we trained at the beginning of the season and how we are doing now, the change is incredible, but I took this team precisely for that, to play better so, consequently, to train better.

"This team deserves to be in the final for all the effort and commitment they have done during the whole season. I know that it has been hard during some moments of the season because I introduced a lot of tactical concepts and suddenly you have too much information "to digest" but despite this, the team never have given up and now we have our reward.

Saldana continued by stating how hungry his side are to bring the trophy back to Manchester.

"Of course, all of the team wants to win the final but for me, more than win or not, they have to enjoy that moment because it's the first futsal final they are going to play with this club and it's very important to play as the other games, with sense, calm and without trying to do something different/spectacular because we have had good results playing as we do.

"We have never seen Helvecia playing so we have no idea what's going to happen. I guess they are in the same position. What I'm sure of is that they are a very strong team as they have won the South league. We haven't won our league, but we have been growing along the season and I think we arrive at our best as a team to face them. So, my predictions are that it will be a very close game where we will have to know how to suffer and compete for 40 minutes; any lack of concentration/intensity can mean defeat for either team and we have to be aware of it."

Women’s captain Leanne Skarratt has put her word on record and expressed how proud she is of the team, as well as the dramatic improvement on the eye under Saldana.

"We put in a solid performance against Peterborough. They are a physically strong side with gifted, technical players. They made the game tough for us at times, but what impressed me most about our performance was our composure during periods of the game when our backs were against the wall a little bit. We stuck to our game plan and remained calm as opposed to panicking, which may have happened in previous seasons.

"We've come on leaps and bounds this season under Sergi. We go to training every week knowing that we will learn something new each session. It's a lot to take in, and some things take a bit of time to implement, but towards the back end of the season things have really begun to knit together. If the players were lesser characters they might've not risen to the challenge as well as they have done. Patience works both ways, and Sergi has been incredible with us in that regard too."

Skarratt continued, "I feel that we are ready. We've been on a winning streak since February, and that always gives you the momentum and confidence you need as you gear up for a final.

"We haven't faced this Helvecia side before, so any predictions would be based off pure guesswork. We know that they are champions of the South League and were National League winners last season, so they are strong and we will need to be at our very best. However, we are also strong and have finished second in arguably the strongest of the three regional leagues this season. It will be a great test but we are up for it."

Manchester will go head-to-head with London Helvecia on Friday 3rd May at St Georges' Park, with kick off at 7pm. Here's to hoping that the trophy comes back north to Manchester.