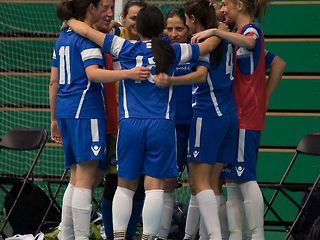 The curtains are closing on what has been an epic Women's Super League North season as Manchester make the quick journey down the M62 and over the River Mersey, they take on Liverpool Futsal in Wallasey tonight.

​​After an eventful outcome for the Blues against Morecambe, in what was a very different result compared to the previous week in Chester, confidence will be sky high when Manchester arrive at Mosslands School later this evening.

The Blues are carrying a few injuries with goalkeeper Becky Wilkins still out after sustaining a broken arm in training.

Team captain Leanne Skarratt spoke to ManchesterFutsal.com about the game later this evening and wants to finish the season on a high.

"It was a great response from the girls, it was vital after such a heavy defeat in our first game against them. Considering Morecambe hadn’t dropped any points this season prior to Saturday, I think is testament to both the talent we have within the squad, and our ‘bounce back ability’. Therefore I think the players will be going into this fixture full of confidence."

"We want to finish our FA Futsal National League North campaign on a high. If we go into the game with the right attitude and play at the tempo we know we’re capable of, then I don’t see any reason why we can’t achieve that."

​Kick off for tonight's fixture is at 8pm and it takes place at Mosslands School in Wallasey, Merseyside.  We wish the girls the very best of luck.